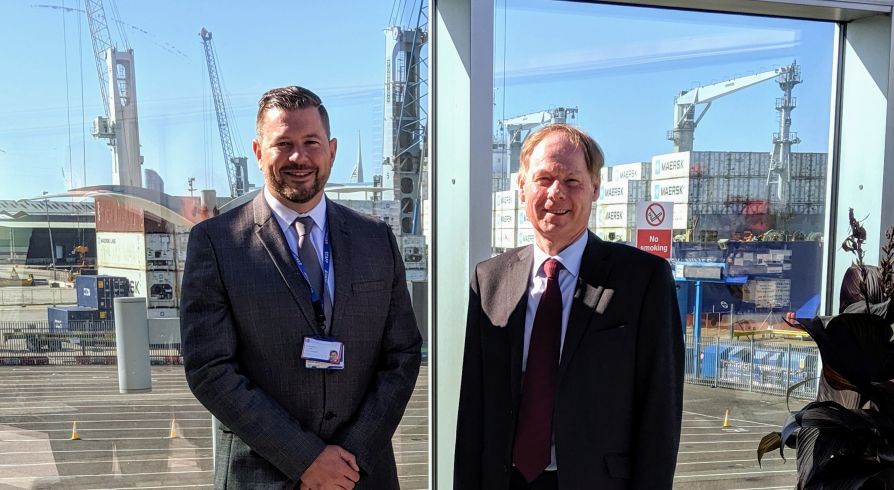 A new harbour master has been appointed at Portsmouth International Port. Ben McInnes will assume responsibility from Tuesday 1 October, when Rupert Taylor retires after nearly 30 years at the port and 19 years as harbour master.

Rupert is a familiar face at Portsmouth International Port with nearly three decades service under his belt. Having joined as assistant harbour master in 1990, ten years later, he was then promoted to harbour master.

With this multi-tasking role, no two days are ever the same. As harbour master, the responsibilities are extremely broad covering all statutory functions of managing the harbour, including port marine safety, environmental and conservation of the harbour, health and safety ashore and afloat, to name but a few.

The job includes the management of the pilotage service, ensuring that commercial vessels entering the busy harbour have on-board assistance from the port’s team of pilots, who are all navigational experts possessing knowledge of the water’s depth, currents, and hazards. Rupert has also been instrumental in helping to develop the port’s cruise ambitions from scratch, building to the 50 calls expected this year.

Rupert Taylor, the retiring harbour master said: “The time has passed by so quickly. It’s been exciting to be involved with so much change, and a delight to play a part in helping Portsmouth International Port go from strength to strength. Investment in new facilities over the years has made a big difference, and the future plans will help to ensure that the number of ships visiting the port can continue to increase.”

Rupert’s successor Ben McInnes was born and bred in Portsmouth, and spent his childhood playing around on boats in Portsmouth Harbour. Ben first went to sea from Portsmouth International Port as an assistant steward on the Pride of Bilbao, washing dishes and making bunks. He then set sail with the Royal Fleet Auxiliary (RFA) on a 12 year career from cadet, to first officer, gaining master mariner certification in the process.

During his time in the RFA he took part in multiple operations, from counter narcotics and disaster relief operations in the Caribbean, through to conflict situations in Afghanistan and Libya. More recently, Ben has been working to achieve Class 1 Pilot status and learning the various elements of harbour management in order to pass the UKHMA harbour master certificate.

Ben McInnes, the port’s new harbour master said: “I felt very lucky to get the role of pilot and deputy harbour master at Portsmouth International Port, and I am immensely proud to have been offered the harbour master position. I have a passion for the city, the harbour and of course the football club. I look forward to building on Rupert’s work, and helping to keep the harbour safe, clean, successful and prosperous, as we look to expand the business for the future.”

Cllr Gerald Vernon-Jackson, leader of Portsmouth City Council, who own and operate Portsmouth International Port said: “Helping to manage one of the busiest waterways in Europe for three decades is a huge responsibility. On behalf of Portsmouth, I’d like to thank Rupert for his service to the port and the city. Here’s to a well deserved and happy retirement.”

Mike Sellers, Port Director added: “During his time at Portsmouth, Rupert has gone above and beyond to help promote the port, helping to secure our existing cruise calls alongside carrying out his statutory role with the utmost professionalism at all times. We all wish him well in his retirement.

“I’m looking forward to working with Ben in his new role, which I have every confidence he will excel at. He takes on the position at a very exciting time for us as construction will soon commence on extending our cruise berth.”