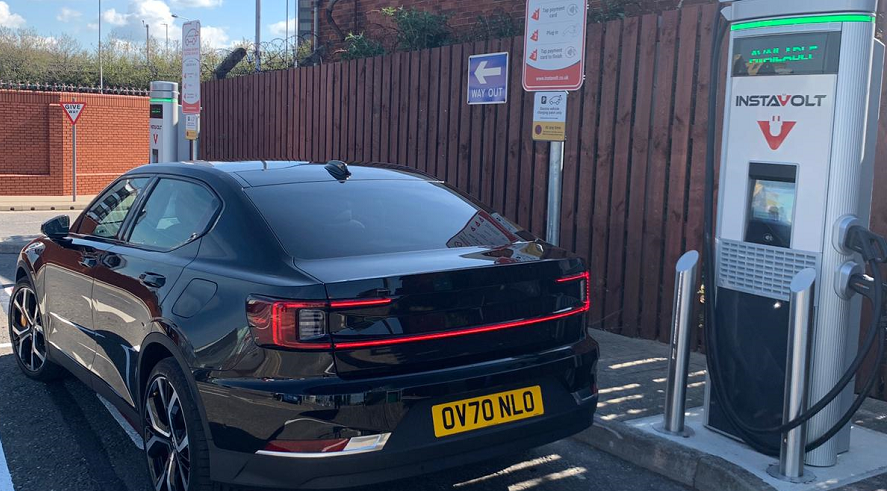 Improving air quality and reducing carbon emissions are two of the most pressing issues facing the maritime and marine industry today. Portsmouth International Port, which is the UK’s largest and most successful municipal port, is taking a proactive, bold, approach.

They’ve been taking people on legendary journeys for the past 45 years, and now they are on their most significant yet, to become the first net carbon neutral UK port by 2030, and the first zero emission port as part of the UK government’s Maritime 2050 strategy.

The latest example of the port’s commitment to these aims is the installation of two new InstaVolt charging points, opposite the terminal building. These can be used by anyone, from holiday makers about to board a ferry, to commuters passing the port on their way out of Portsmouth on the M275.

These new charging points will increase the accessibility of rapid charging technology, delivering charging speeds of up to 120kW to EV owners. InstaVolt’s ‘open charger’ model enables anyone who visits the port to use its charging points on a pay-as-you-go basis, boosting visibility and ease of charging.

InstaVolt have also recently launched a dedicated mobile app to help combat range angst amongst British drivers and fast track EV adoption in the UK. The app is optional for users and sits alongside the company’s popular contactless payment option that revolutionised public charging when it launched in 2017.

The app offers motorists additional functionality including a live map of InstaVolt’s charging network, a loyalty scheme that allows drivers to earn credit every time they charge and the ability to track charging history.

Stephen Watkyns, Head of engineering at Portsmouth International Port said: “We want to ensure we’re playing our part to help drivers, as they switch to more sustainable models of transport in an effort to tackle climate change.

“These new charging points are just one of a number of sustainability projects underway across the site, which include the installation of further 1MW of solar panels at the port, and the switch to electric vans for our engineering team.”

Cabinet Member for Climate Change and the Green Recovery at Portsmouth City Council, Cllr Kimberly Barrett, added: “Our target is for the whole city to become carbon neutral by 2030. Projects such as this not only benefit visitors to Portsmouth who are using the port, but also the city’s residents who can use them.

“We’re increasing the number of charging points both on-street and in the city’s car parks to encourage people to switch to electric, so this new InstaVolt station will help us achieve our ambitions”.

InstaVolt’s Chief Executive Officer Adrian Keen said: “We’re delighted to have installed two chargers at Portsmouth International Port and to form part of its journey towards becoming the first net carbon neutral port in the UK. InstaVolt is on a mission to offer easy to use, reliable, rapid charging options to all EV drivers and being placed in this strategic position will help all EV drivers in the area be able to quickly recharge their car’s battery.

“The installation of the two InstaVolt chargers will also serve as an encouraging tool for local people to engage in the transition to electric vehicles ahead of the 2030 target. It’s through collective efforts from consumers and businesses that we will be able to fight back against the climate emergency and we’re proud to be doing this alongside Portsmouth International Port.”