New artwork shows that “Together We Can” combat climate change 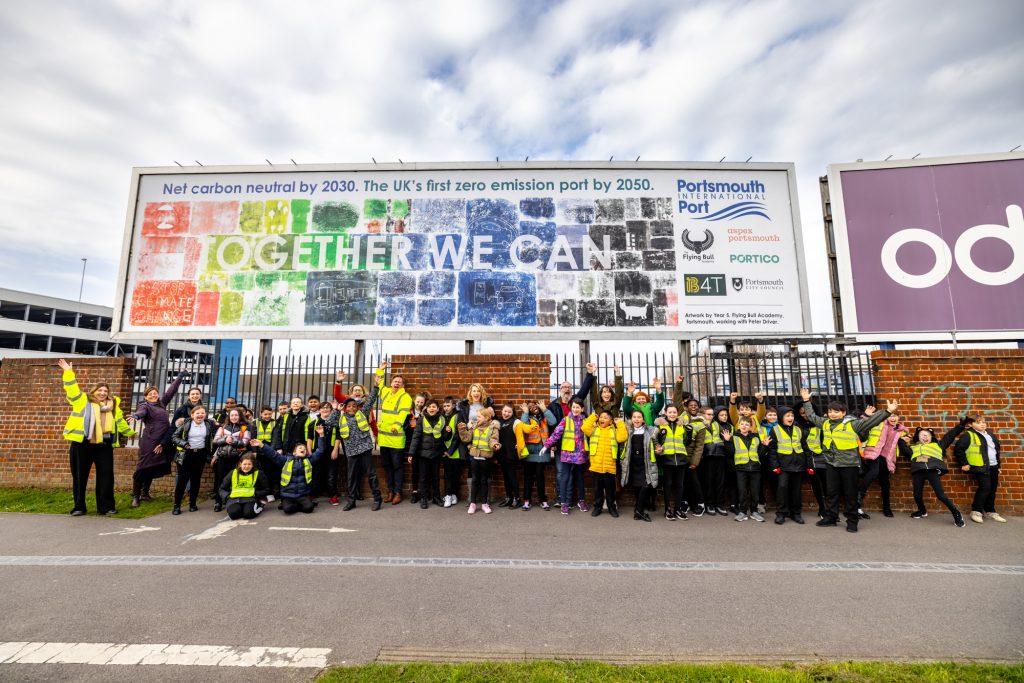 Portsmouth International Port have been working with Aspex, artist Peter Driver and The Flying Bull Academy on a collaborative artwork, which is now displayed on a 13 metre long billboard just outside the port.

It is hoped that the artwork, which was unveiled today and is on display until the end of March, will help to inspire residents and passengers passing through the port to make positive changes to help tackle climate change.

Portsmouth International Port has bold plans to tackle emissions and carbon, and aims to be net carbon neutral by 2030, and become the UK’s first zero emission port by 2050. 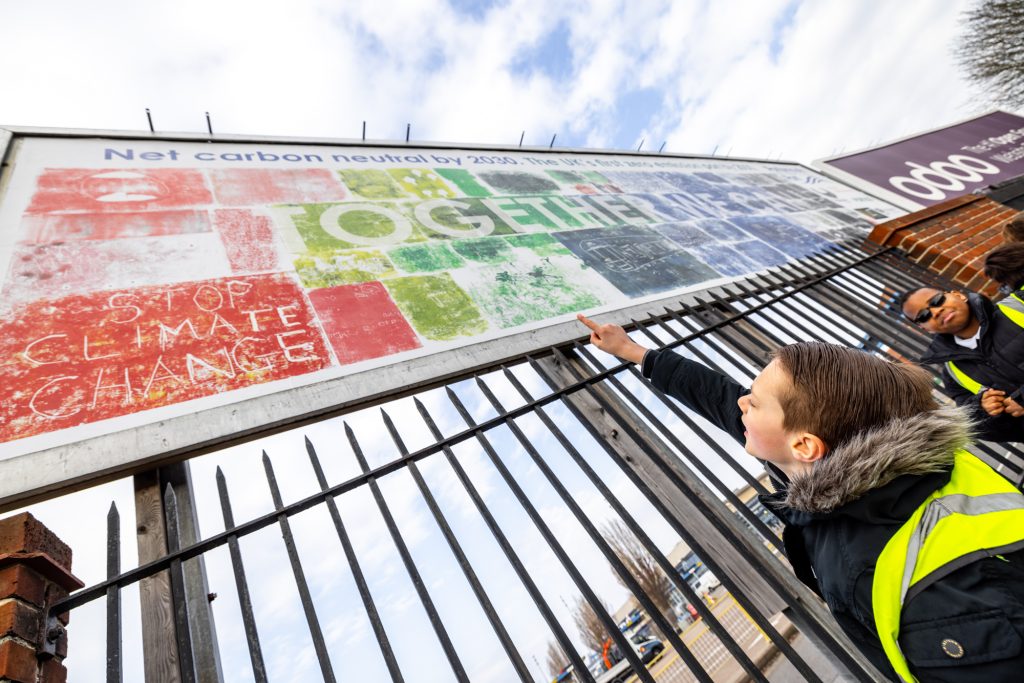 As a municipal port, owned by the people of Portsmouth, they have an obligation to ensure that their success doesn’t have a detrimental effect on local people living nearby.

Over the past two months, the port has worked with Aspex and artist Peter Driver, to create a collaborative artwork with year 5 children at The Flying Bull Academy, which is less than 500 metres away from the port. 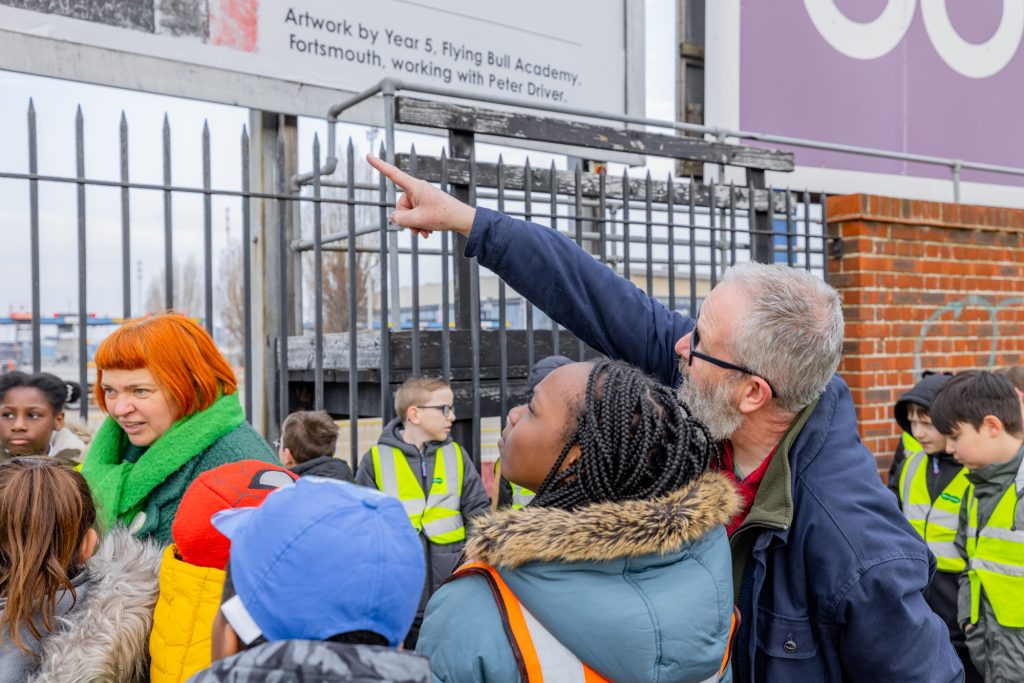 This project off kicked during Portsmouth City Council’s Aspirations Week, which is designed to give children the chance to start thinking about what they might want to be in the future. The children heard from the port about the wide range of projects that are underway to reduce carbon and emissions.

They also heard from Alex Barter, managing director at B4T, about the technology behind the port’s innovative air quality sensors, and from Portsmouth City Council’s Energy Services team (below) who told them all about the new solar panels they are installing at the port. They also provided information about the schemes they have on offer to help their families save energy. 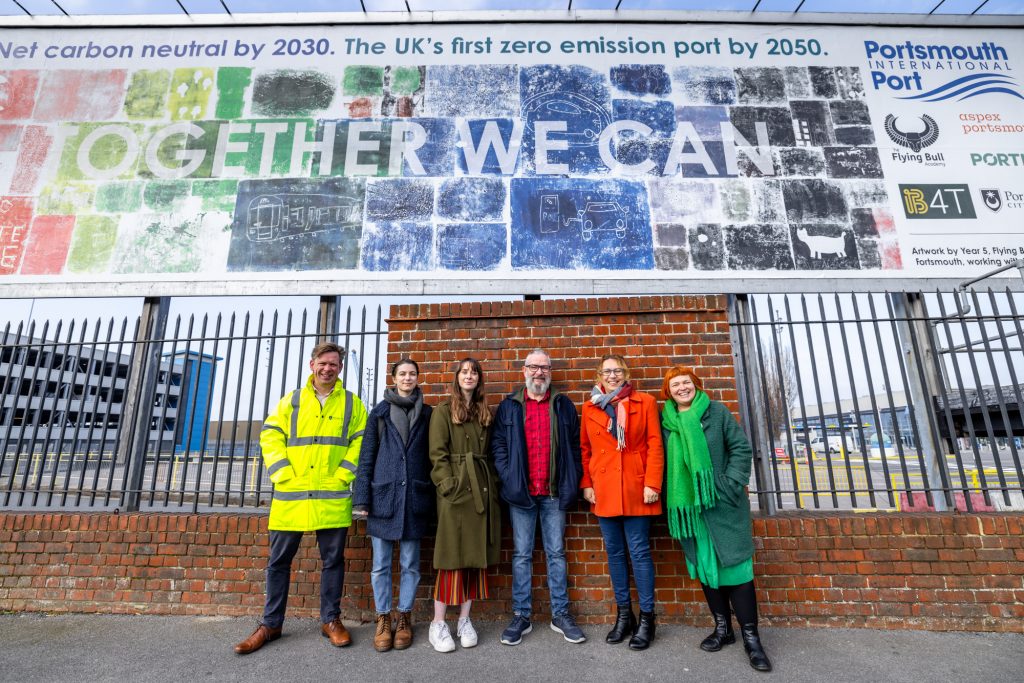 This was followed by a bus tour of the port and neighbouring Portico, then a print making workshop at the school, led by Peter Driver and supported by Aspex. The children learnt printing making techniques, and then produced artwork about sustainability and climate change. All of these prints were then incorporated into one large billboard poster, which will be in place on Mile End Road, outside the port, for a month.

”The port’s commitment to sustainability is something the city should be really proud of.

“This exciting project, which has fused art, industry and sustainability, has given children at The Flying Bull Academy a real insight into the port’s green plans for the future, along with the opportunity to learn a new artistic skill.

“I’m delighted to see such a wide range of organisations and individuals from the city and the wider region come together to provide an enriching experience for local children.”

“I’m really impressed by the results of this project, the children at Flying Bull Academy should be really proud of what they’ve come up with. It’s brilliant that it’s now on a huge billboard outside the port for residents, passengers and visitors to Portsmouth to see.

“One of our aims over the coming year is to reach out to the local community and show them more of what is going on right on their doorstep, especially our plans to reduce emissions and carbon.  Thanks also to Alex Barter from B4T and the Energy Services team for their support.”

“We were thrilled to be selected to take part in this worthwhile project and learn more about the topic of sustainability. The children have learnt so much and were excited to get to work with a real artist! More importantly, it has really got them thinking about the long term problems that our planet faces if action isn’t taken now.

“They were given the challenge of using the billboard as a way of getting their voices heard and they had lots of great ideas and resolutions that they wanted to share with the wider community.”

“The pupils of Flying Bull School, working with artist Peter Driver and our team at Aspex have produced such a stunning creative response to what they learnt on their visits to the Port. This beautiful and thought provoking work will raise awareness of environmental issues which impact our city and the steps the port is taking to actively respond to this challenge.”

Peter Driver, the artist who led the project added:

“It was delightful working with the pupils and staff from Flying Bull Academy on this experimental project. We decided everyone’s work should be included as it reminds us that we can all play a part in tackling climate change. Our small actions added together can make a big difference.”