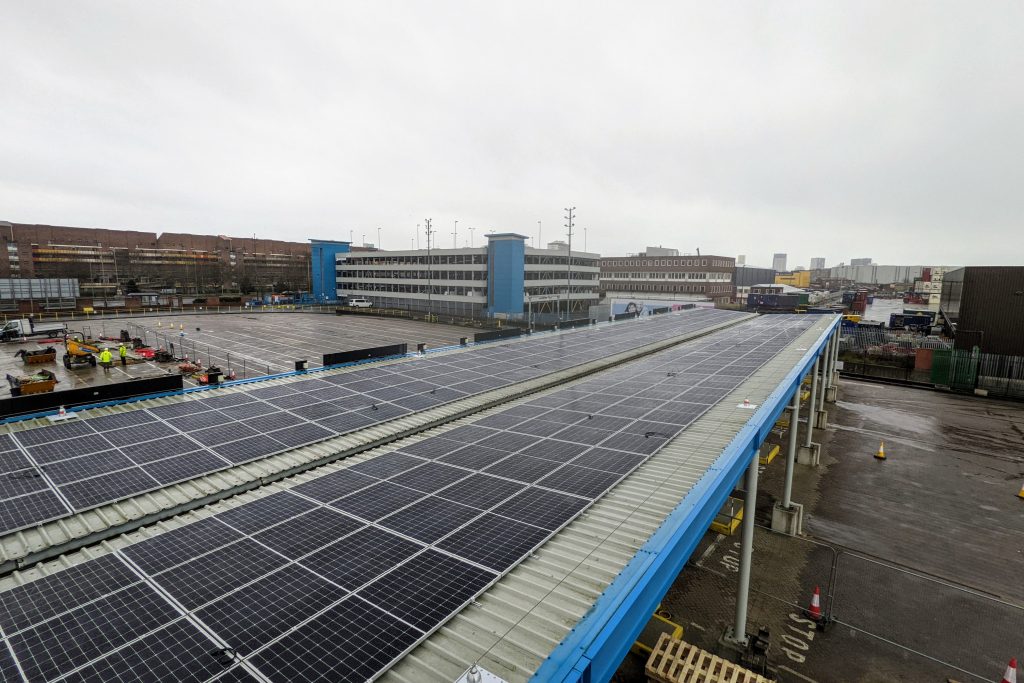 The installation of a ground-breaking solar and battery system is underway at Portsmouth International Port, managed by Portsmouth City Council’s in-house energy services team. The project began in February 2022 and will incorporate roof-mounted solar panels across a number of buildings, a large battery and solar canopies.

The installation of a ground-breaking solar and battery system is underway at Portsmouth International Port, managed by Portsmouth City Council’s in-house energy services team. The project began in February 2022 and will incorporate roof-mounted solar panels across a number of buildings, a large battery and solar canopies.

When completed, the power produced by the 2,660 solar panels will contribute around 35% of the site’s power; a significant step in Portsmouth International Port’s ambition to be the UK’s first net zero carbon port. The installation is due to complete in summer 2022.

The project breaks new ground for the council and in the national context. It is the first UK port to have solar canopies and a mega-watt sized battery installed as part of a renewable installation. When completed, the 1.2 megawatt peak system, will be the largest solar and battery installation to date across the council’s portfolio of renewable generation.

As well as generating carbon-free power, the solar canopies will provide shade for cars waiting to board ferries; allowing them to stay cooler for longer, without having to run their engines.

The battery, with a capacity of 1.5 megawatt hours (enough to run a typical home for 4 months), will capture green power that would otherwise be exported from the site and using it in the port’s buildings when it is needed.

The new battery will work in tandem with an upcoming battery storage pilot announced in the summer; supplying balancing services to the national grid and storing power during lower pricing periods. When complete, it is estimated that in optimum conditions that up to 98% of the electricity consumed by the port could come from the combined solar and battery installation.

“I’m delighted to see that work has begun on this ground-breaking project. Once completed, this new system will reduce Portsmouth’s carbon emissions, in line with our commitment to reduce carbon emissions to net zero by 2030.

“The port is owned by the people of Portsmouth, so we have a duty to control and reduce the impact of port operations on the local environment.

“We’re delighted to work with the wider council and Custom Solar on this exciting project. It will significantly expand our solar generating capability, and is part of an integrated approach that will help us to offer shore power for smaller ships, without having to take extra power from the local electricity grid.

“Combined with other sustainability initiatives, it will help us achieve our ambition of becoming one of the UK’s first zero emission ports by 2050”.

The work is the latest in a series of solar and battery projects being managed by the council’s in-house energy services team. The team procured Custom Solar after a competitive tender exercise through the council’s newly established PV and Storage framework.

“We are thrilled to be working with Portsmouth City Council in the delivery of this special project, utilising our experience in developing and delivering solar at another established British port.

We have already broken ground and we are excited to showcase a solar rooftop, solar carport canopy, and battery storage system. We are proud to have been selected to work towards the environmental ambitions of Portsmouth International Port and look forward to delivering another major on-site project in a busy operational environment that will aid in carbon reduction goals.”