Cruising through Brexit with a new Entente Cordiale 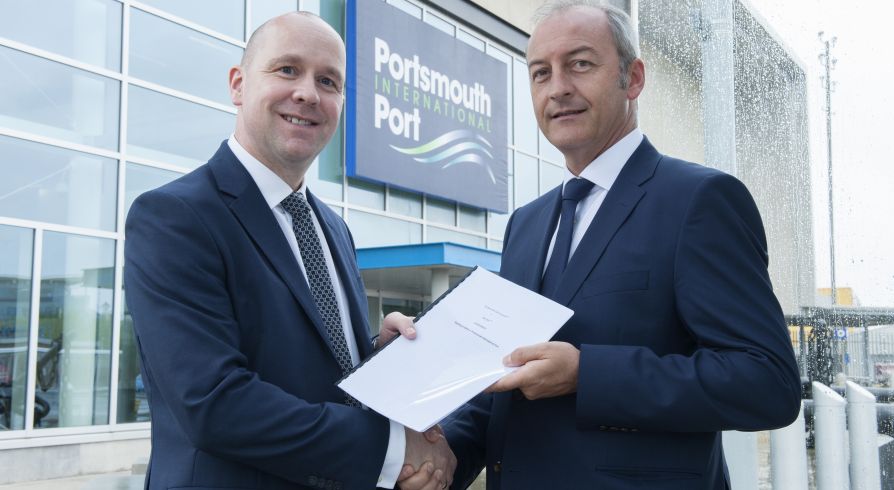 As Brexit talks between the UK government and its European counterparts begin, a major deal highlighting ever closer British and French business relations was signed at the Port in May.

Portsmouth International Port and Brittany Ferries have made a 10 year commitment to each other, promising to strengthen long established ties. The deal stretches through to 2027, and will see Britain’s Best Connected Port work even more closely with its biggest customer. The new agreement comes as the UK prepares to leave the EU to sail a new course in global trade and co-operation.

The decade long deal was signed on board Brittany Ferries ship Bretagne. Port Director, Mike Sellers, was joined by Christophe Mathieu, CEO of Brittany Ferries, and other guests at a lunch in the ship’s Les Abers restaurant.  Afterwards both put pen to paper to sign the new agreement. This is the first time a formal deal this long has ever been signed, despite the relationship between the two organisations dating back more than 40 years.

Mike Sellers, Port Director of Portsmouth International Port, said: “This deal really demonstrates a belief in each other’s ability to deliver, and highlights the crucial role Portsmouth International Port and Brittany Ferries play in trade to France and Spain. Whatever the details of the final Brexit deal are, we can now guarantee an ever stronger link for businesses and holidaymakers going to and from France and Spain from Britain’s Best Connected Port.”

Portsmouth International Port has recently announced a £9million investment in one of the berths used by Brittany Ferries. The current double decker linkspan, which acts as a drawbridge to load vehicles onto the ferry, will be replaced after 25 years of service. During that time it’s estimated to have helped the smooth operation of 40,000 ferry movements.

Brittany Ferries is planning to build a new cleaner and greener ‘super ferry’, to be based at Portsmouth International Port.  The ship will be powered by Liquid Natural Gas (LNG), and will operate in tandem with the popular cruise ferry, Mont St Michel.

The announcement of a new ferry comes as Brittany Ferries reports strong passenger and freight figures, driven by its business at Portsmouth International Port. In 2016 overall passenger numbers were up for the fourth consecutive year, providing Brittany Ferries with its best performance in a decade.

Christophe Mathieu, CEO of Brittany Ferries, said: “Regardless of Brexit, tourism will continue to connect the beautiful regions of southern England and northern France. In signing this agreement I am therefore pleased to be strengthening our ties and making a long-term commitment to a city that has served as our international hub for decades. Of course there may be challenges ahead. But we remain very positive about the future of trade and transport between the UK and France”.

Brittany Ferries first sailed into Portsmouth International Port in 1976 as one of its earliest customers. Owned and operated to this day by Portsmouth City Council, the Port has worked closely with Brittany Ferries for the last 40 years. It has been the one and only ferry operator to use the Port on a constant basis during the last four decades.