Engineering achievement at the port marked with ceremonial naming 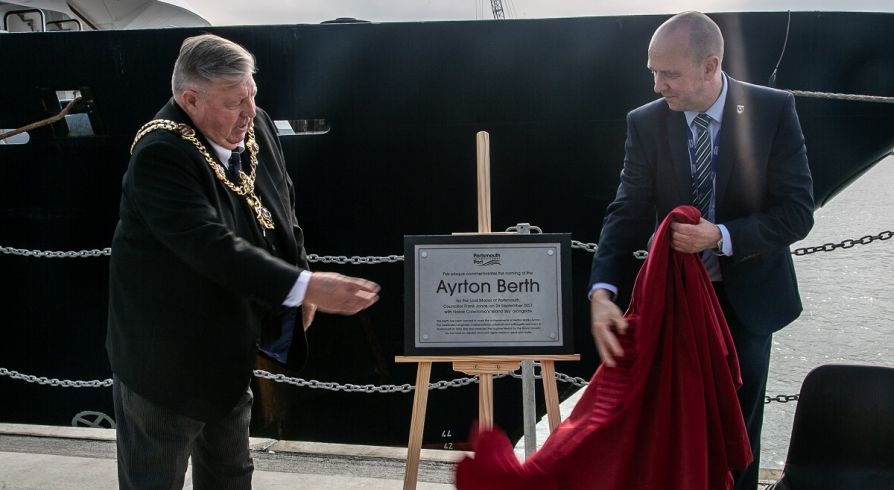 One of Portsmouth International Port’s most complex engineering projects, it was undertaken during a period of significant challenge during the coronavirus pandemic. Despite this, the project was delivered by summer 2020 by by construction firm Knights Brown, ready to receive ships providing vital lifeline services.

The multi-million pound berth extension means the port can now manage larger ships, including Virgin Voyages’ Scarlet Lady, which was based in Portsmouth for a successful summer season this year. It can also handle multiple smaller ships at one time, which gives the port’s boutique and expedition cruise customers, such as Noble Caledonia, more flexibility.

The berth’s name of the ‘Ayrton Berth’ was chosen following an open submission competition. A number of very good suggestions were received, which were then whittled down to the winning submission by port director, Mike Sellers, and the Leader of Portsmouth City Council, Cllr Gerald Vernon-Jackson. Hertha Ayrton was chosen not only for her strong links to the city, having been born in Portsea in 1854, but also for her remarkable career and undoubted engineering prowess.

Hertha Ayrton, born Phoebe Sarah Marks, was a distinguished British woman scientist, who, in 1902, was the first woman to be proposed for the fellowship of the Royal Society. Hertha’s candidature was refused on the grounds of her ineligibility for the fellowship. As a married woman she had no legal existence in British law.

However, in 1906 she was awarded the Hughes Medal of the Royal Society for her work on electric arcs and ripple marks in sand and water, the first woman to receive it for work exclusively her own.

On Sunday 26 September, a plaque was unveiled by the Lord Mayor to mark the naming of the berth, in front of Noble Caledonia’s ship Island Sky. This was followed by a blessing from the Dean of Portsmouth Cathedral, The Very Reverend Dr Anthony Cane.

The Lord Mayor of Portsmouth, Cllr Frank Jonas BEM, said: “It was an honour to mark this remarkable achievement, by naming this berth after a remarkable woman.

“Portsmouth’s history, and prosperity, have been made by the city’s links with the sea. This newly extended berth offers the opportunity for more ships and visitors to come to our great city, and experience what we all think makes Portsmouth so special.”

Dean of Portsmouth Cathedral, The Very Reverend Dr Anthony Cane, added: “The spirit of innovation and discovery that Hertha Ayrton showed is alive and well in Portsmouth and its International Port. It was honour for me to bless the berth named after her, and to pray for all who will arrive at and depart from that place.

“Congratulations to all involved for enabling more visitors to come to Portsmouth, and through the success of the port, for making such a welcome contribution to the welfare of the city and all its people.

Mike Sellers, Portsmouth International Port’s director said: “This is a major milestone for our ambitions. When we embarked on the construction we knew it was a complex development.

“Operating in a marine environment always poses significant challenges, for what can appear a straightforward project.

“When the pandemic arrived we were well into the work and any delays would have had a significant impact.

“As a lifeline port it’s was critical we can accommodate a range of ships and we needed our berth back in action as soon as possible.

“Since then, we’ve broken the record for the largest vessel we’ve handled three times, with the current title being held by Virgin Voyages’ Scarlet Lady.

“We’re now looking to the future with a number of exciting projects will not only enhance the passenger experience, but will ensure we grow sustainably in line with our net-zero ambitions.”